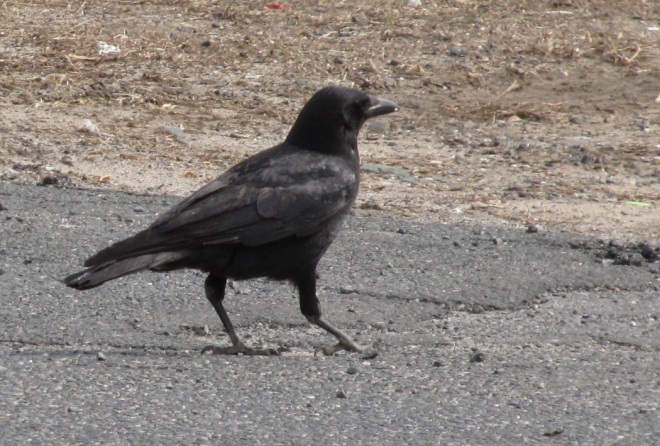 Opportunist. Crows are excellent hunters, pirates, and scavengers. They eat over 600 foods. A third of their diet consists of insects, frogs, salamanders, fish, snakes, bird eggs and young, small mammals, carrion (including roadkills), and garbage (in landfills); the rest is plants, mostly corn or waste grains in fields that have been harvested. They’ll also eat peanuts, sunflowers, pecans, various fruits, and sorghum. During the winter, they survive mostly on waste grain. From spring through summer, crows eat mostly worms, insects, and other invertebrates. One crow often acts as a sentinel while others feed.

Social style: Sociable, living in family groups with the young of previous years, who may help bring up the current brood. Crows gather and roost in flocks of ever-increasing size as the seasons progress through winter.

Migrates? Some do, some don’t.

Habitat: Prefer open agricultural lands, old fields, meadows, with nearby orchards, woodlots, or hedgerows for nesting and cover. Crows are adapting to using parks and tree-lined streets in suburban and urban areas as large roosting areas and nest sites. They will fly up to 12 miles during the day to feeding sites, then return to the roost at night.

Territory and home range: Territorial during the nesting season.

Pair bonding style: Monogamous. Crows have strong pair bonds that endure over the years, but they probably occasionally mate with others. Both sexes help build the nest and rear the young. Female incubates the eggs by herself, but the male will feed her and guard the nest when she leaves. (Other females may feed the incubating bird, too.)

Breeding dates: From March–June. They lay their eggs in the end of March. One brood/year.

Fledging dates: About 35 days from hatching. The young leave the nest at 5 weeks to forage with parents.

Amount of time young remain with parents beyond fledging date: Often one or more years.

Federally protected migratory bird (under the Migratory Bird Treaty Act). In New York, crows are a protected game species with an open season. An exception to the Migratory Bird Treaty Act allows the taking of crows without a federal permit when the birds are “found committing or about to commit depredations upon ornamental or shade trees, agricultural crops, livestock, or wildlife, or when concentrated in such numbers and manner to constitute a health hazard or other nuisance.” In these cases, you don’t need permits beyond your NWCO license.

Sometimes, damage blamed on crows is caused by other species such as blackbirds, starlings, pheasants, grackles, or mice. Often, community cooperation is critical for effective solutions to nuisance problems caused by a large urban roost.

Trapping is probably impractical for large flocks. There may be some situations in which it makes sense, especially if there aren’t many crows in the area.