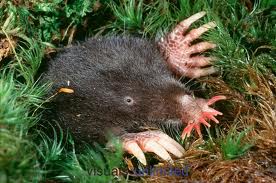 Moles are unprotected in most states.

Moles are small mammals that spend most of their lives underground. They feed primarily on soil-borne insects, grubs, and earthworms that they encounter while tunneling beneath the surface. The star-nosed mole (Condylura cristata, Figure 1) is the most common and widespread mole in the northeastern US.  Eastern (Scalopus aquaticus) and hairy-tailed moles (Parascalops breweri) may also be common.

Moles have several physical characteristics (Figure 2) that distinguish them from voles and shrews. The snout is hairless and extends nearly ½ inch in front of the opening of the mouth. The small eyes and openings of the ear canal are concealed with fur. They lack external ears. The forefeet of moles are large and broad, with palms wider than they are long. The toes are webbed to the base of the claws, which are broad and depressed. The fur is short, dense, and very soft with no knap, allowing moles to travel backwards in tunnels.

Star-nosed moles typically are 6 to 8 inches long and weigh about 2 ounces. Their fur is blackish-brown.  They have a long, thick tail, 44 teeth, and a ring of 22 pink, fleshy tentacles at the tip of their snout (Figure 1).

Star-nosed moles are common throughout the northeastern US, and share much of the same range as the hairy-tailed mole. Eastern moles occur in southern New England, New York, and the eastern US.

No human health or safety concerns are associated with moles.

The mole gestation period is about 42 days. A litter of 3 to 5 young is produced each year, mainly in late spring or early summer. Pups leave their mother after only 30 days, and are sexually mature about 10 months after birth.  They may live 3 to 5 years.

Mole nests are typically located in the root system of trees. Deep runways lead from the den to hunting grounds. The den consists of irregular chambers connected to deep runways. The runways follow a course 5 to 8 inches beneath the surface of the ground. The chambers from which the runs radiate are about the size of a quart jar.

Moles are not social. Two or 3 moles may be trapped at the same spot, but that does not necessarily mean they had been living together in a burrow. Networks of runways that were made independently occasionally join with separate burrows. Moles do not hibernate and are active year-round. They are most active when searching for food during periods of rain in late spring and early summer.

The home range of a male eastern mole is thought to be about 3 acres. Moles cover a larger area than do most subterranean animals due to their substantial food requirements. Three to 5 moles per acre is considered an average to high density.

Moles live in underground burrows and rarely come to the surface. They favor wooded habitats where the soil is loose and moist. Moles cannot survive in hard, compact, semi-arid soils. They make nesting burrows in high, dry areas, but prefer to hunt in soil that is shaded, cool, moist, and populated by worms, grubs, and insects. This accounts for the often abundant populations of moles in lawns and parks. When the season gets very dry, moles often move to irrigated areas.

Most of the runway system consists of shallow tunnels ranging through its hunting area. The subterranean hunting paths are 1¼ to 1½ inches in diameter. The tunnels may not be used again, or they may be used at irregular intervals. Eventually, the tunnels fill with soil as they settle, especially after heavy rain. In some cases, moles push the soil they have excavated from their deep runways into shallow tunnels. Moles usually ridge up the surface of the soil, so their tunnels can be followed easily. In wet weather, runways are very shallow. During dry periods, they range deeper, following the course of earthworms and insects.

The diet of moles consists mainly of insects, grubs, and worms. Moles take plant material inadvertently, or when alternative foods are unavailable. Digging through soil requires a tremendous amount of energy and thus large amounts of food. Moles consume 70% to 100% of their body weight each day.

Moles rarely make sounds that can be heard by humans, but cats and dogs can hear moles tunneling in yards.

Moles “swim” through soil, often near the surface of ground, in their search for food. In doing so, they may damage plants by disrupting the roots. You can identify areas that have been used for feeding by the number of short, crooked, tunnels in a concentrated area. Mounds indicate where moles have pushed soil to the surface to clear deep tunnels.

Moles frequently are blamed for damage to gardens, although the majority of direct damage is caused by rodents using mole tunnels to gain access to plants. Mole damage, particularly to turfgrass, tends to be limited to the separation of roots from the surrounding soil, caused by tunneling.

Moles remove many damaging insects and grubs from lawns and gardens. However, burrowing by moles disfigures lawns and parks, destroys flowerbeds and the roots of grasses, and creates havoc in small gardens.

Damage to Crops and Livestock

Moles do not pose a threat to crops or livestock.

Damage to structures tends to be limited to patios made of brick or pool areas, where digging can undermine foundations.

The use of soil insecticides often is not effective for reducing damage done by moles. They are difficult to apply correctly, and if populations of soil-borne insects are reduced, moles may increase digging in search of food, possibly increasing damage to turf or gardens. A lawn can be free of grubs and still have moles. Moles eat grubs, but also feed on worms and ants.

Generally, exclusion is not practical. For small areas, such as seed beds, install a fence of 24-inch roll sheet metal or hardware cloth. Place the fence at the surface of the ground, bury it to a depth of at least a foot, and bend it to a 90o angle (Figure 3).

Frightening devices have not been shown to be effective for repelling moles.

Products made with castor oil, such as MoleMed®, have shown limited effectiveness in repelling moles. The product containing castor oil must be thoroughly watered into the lawn, following the directions on the label. For best results, spray the entire area to be protected. Moles may burrow under a treatment made along a perimeter. This product may not be registered in all northeastern states.

Gopher purge (Euphorbia lathyris), also known as “mole plant,” has been promoted as a mole repellent, but it has not been proven to be effective. It is poisonous to people, and it is a weed that may become a problem.

Moles primarily feed on insects and earthworms. Consequently, grain- or nut-based toxic baits (usually containing zinc phosphide), are not likely to be eaten by moles.

Two other bait products, Kaput® and Talpirid®/Tomcat® may be more effective for the control of moles. Kaput® is a gel with warfarin that is squirted into a run. Talpirid®/Tomcat® is formulated as a synthetic replica of a worm that contains bromethalin. Tomcat®is a general-use pesticide. Follow all instructions on the label. There is little research to validate the effectiveness of these toxicants. Success has been mixed based on anecdotal reports.

Aluminum phosphide and gas cartridges are fumigants that are registered for mole control in some states. Fumigants are most effective when placed in deep burrows rather than surface runways. Fumigants are ineffective where soils are porous and dry, or where there are extensive feeding tunnels near the surface. Check your state pesticide regulations, and follow all label directions. In some states, such burrow fumigants may be available only to certified applicators.

Shooting is not a practical method for moles.

The most successful and practical method for controlling moles is trapping. Several styles of mole traps are on the market (Figure 5). Each type of trap is effective if used properly.

To increase effectiveness in mole trapping, survey the yard area looking for straight runs (ridges) that lead to overhead protection, such as a large tree or patio.  Press down ridges in several places and mark the sites with flags.  Inspect the flagged sites after 2 to 3 hours to determine which ridges have been raised and which runs are active.  Set a trap on each active run.  Reset traps that are successful in capturing moles.

Figure 5. Traps for moles, listed in clockwise from the top: Victor® (harpoon), Out O’ Sight® (scissor-jawed) and Nash® (choker loop). Photo by UNL.

Relocation of moles is not practical.

Translocation of moles is not practical.

Use carbon dioxide to euthanize moles, if necessary.