North America’s only marsupial (mammals whose young develop in a pouch). They’re more closely related to kangaroos and koalas than to the other animals in the neighborhood! 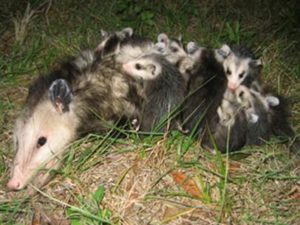 4–14 pounds. Body is 15–20 inches long. They often suffer frostbite and lose part of their tails and ears.

Hibernator? No, but does den up for days at a time when the weather is bad.

Distribution in NY and the Northeast: rural, suburban, and urban areas; parks.

Habitat: Wide ranging—arid to moist, woodsy to open, but more common near streams and swamps. Dens in a different place three out of four nights (except in the cold of winter). They find shelter under buildings, in brush heaps, hollow logs or trees, old crow or squirrel nests, and rock crevices. Opossums may share quarters with woodchucks, skunks, and rabbits.

Territory and home range: not territorial. They have constantly shifting home ranges and may be considered nomadic. Home range is usually 10–50 acres.

Breeding dates: February–June. Most females, though, have just 1–2 litters per year. The young are born about 13 days after breeding.

Life in a pouch: The tiny (about 1/2″ long) young are born blind and helpless. They must crawl into the mother’s pouch and attach to a nipple. They’ll remain in the pouch for 7–8 weeks, firmly attached to that nipple. Then, for about two weeks, they’ll begin to explore the world, often riding on the mother’s back. They’ll return to her pouch to nurse. They’re weaned at about 3 months old and are generally fully independent by the time they’re seven inches long.

“7. Whenever black, grey and fox squirrels, opossums or weasels are injuring property on occupied farms or lands or dwellings, they may be taken at any time in any manner, by the owners or occupants thereof or by a person authorized in writing by such owner or occupant.

9. Varying hares, cottontail rabbits, skunks, black, grey and fox squirrels, raccoons, opossums or weasels taken pursuant to this section in the closed season or in a manner not permitted by section 11-0901 shall be immediately buried or cremated. No person shall possess or traffic in such skunks or raccoons or the pelts thereof or in such varying hares or cottontail rabbits or the flesh thereof.”