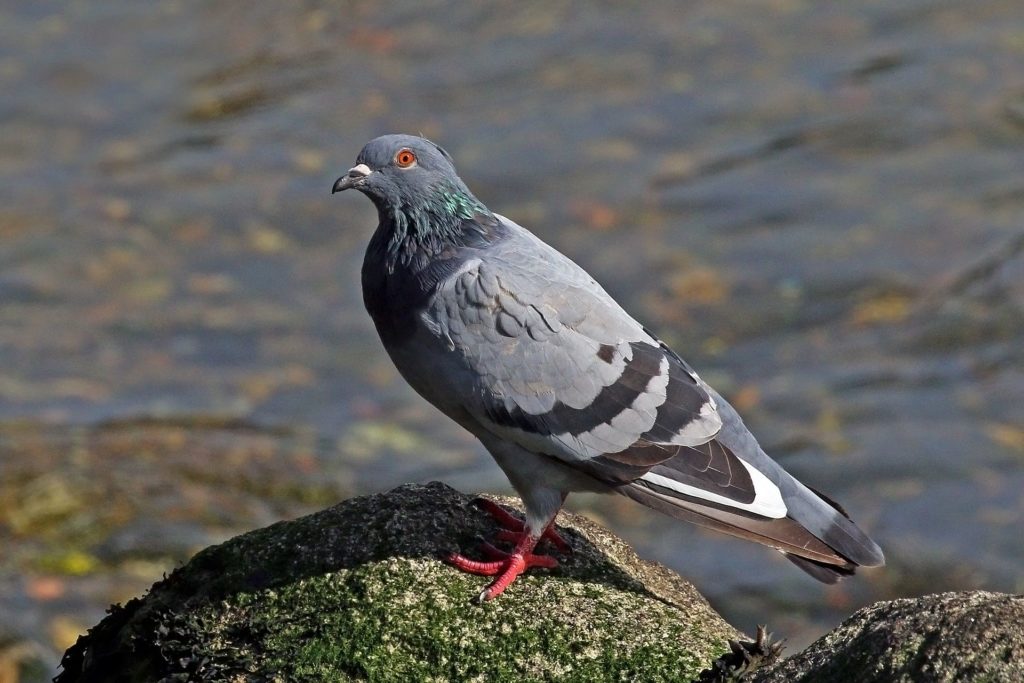 Mostly herbivorous. Pigeons eat mostly seeds and grains, but will eat garbage, livestock manure, insects, and the bread and crackers that people feed them.

Distribution in NY and the Northeast: Common in cities and around farms and certain agricultural businesses.

Territory and home range: Pigeons will defend a small area immediately around their nest site.

Pair bonding style: Monogamous, but both sexes may occasionally mate with others, too. The male guards the female and nest. Both sexes feed the young.

Breeding dates: Year-round, with peaks in the spring and fall. Females lay more eggs even before the young leave the nest.

Fledging dates: Young leave the nest about 10 days after hatching.

Amount of time young remain with parents beyond fledging date: Very little, if any. If the young return to the nest site when the parents are raising a second brood, they will be driven off.

Unprotected. The pigeon is an exotic species; an exemption to the Migratory Bird Treaty Act allows for its control without a federal permit. Local ordinances may prohibit certain control measures. From ECL 11-0513:

2. Notwithstanding any other law to the contrary, the local legislative body of any city, town or village, or in the city of New York the Department of Health may take or issue a permit to any person to take pigeons at any time and in any humane manner in such municipality, whenever such body or administration finds that pigeons within such municipality are or may become a menace to public health or a public nuisance; provided, however, that no pigeon may betaken in a manner which will endanger other animal life, persons or property.”

Keep them out of, and off of, buildings:

There are pesticides registered for use against pigeons in New York:

The pigeon is an exotic species, so please do not release any into the wild in large numbers (chapter two explains why). If a few pigeons are causing some trouble and your customer prefers nonlethal techniques, rest assured that releasing a few birds is not going to make a significant difference in New York’s pigeon population. Unfortunately, they are both abundant and well-established.