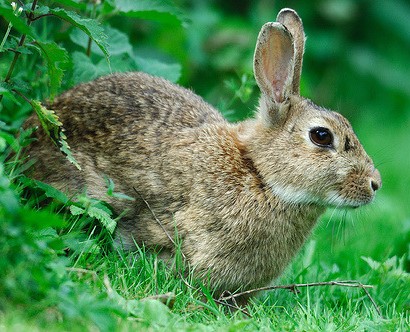 Herbivore. In the winter, they often eat the bark, twigs, and buds of ornamental shrubs and fruit trees because everything else is covered by snow. In the spring and summer, they switch to vegetables, field crops, flowers, and other succulent green plants. It’s probably easier to list what rabbits won’t eat than what they will, because they’ll eat many kinds of plants. They don’t dig up carrots or flower bulbs and don’t like tomatoes.

Social style: Mostly solitary, although they may have an informal social network.

Daily activity: Nocturnal, and crepuscular. May feed during the day in summer, under or near thick cover.

Distribution in NY and the Northeast: rural and suburban areas; parks.

Habitat: Prefer brushy fence rows, field edges, overgrown pastures, sapling stands, and shrub or perennial borders in landscaped backyards. They don’t need a water source because they can get what they need from snow or dew. Can reach densities of 3–5/acre; more, if the habitat is favorable. They don’t dig holes, but will take refuge in a skunk or woodchuck burrow in bad weather—always staying right near the entry. Normally they rest in small depressions in the grass.

Territory and home range: Not territorial, but they are aggressive and establish a dominance ranking within each gender. Females are generally dominant over males, except during breeding. Rabbits have overlapping home ranges of 1–14 acres (average 5 acres) which may shift as food sources and cover change with the seasons. Males’ home ranges are somewhat larger than females.

Breeding dates: Late February through September. Gestation is variable but averages 28 days. Females have up to six litters per year, giving birth to as many as 35 young. Females may breed again as soon as they’ve given birth.

Litter size: 4–5. May see as few as 2 or as many as 8. Mothers only visit their young at night, to nurse them.

Amount of time young remain with parents beyond weaning date: Not long.

“4. Varying hares, cottontail rabbits and European hares which are injuring property on occupied farms or lands may be taken thereon, at any time, in any manner, except by the use of ferrets, fitch-ferrets or fitch, by the owners or occupants of such farms or lands or by a person authorized in writing by them and actually employed by them in cultivating such farm lands.

9. Varying hares, cottontail rabbits, skunks, black, grey and fox squirrels, raccoons, opossums or weasels taken pursuant to this section in the closed season or in a manner not permitted by section 11-0901 shall be immediately buried or cremated. No person shall possess or traffic in such skunks or raccoons or the pelts thereof or in such varying hares or cottontail rabbits or the flesh thereof.”

Rabbits are such prolific breeders and there are always so many nearby that are ready to move into a vacant territory that removal won’t be effective for long. The best solution combines exclusion and habitat modification.

Rabbits are such prolific breeders that trapping—or for that matter, shooting—won’t solve the problem for long. More rabbits will gladly move in from other areas.