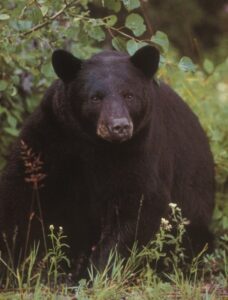 When on all fours, male black bears stand about 3 ft. high at the shoulder, and may be up to 6 ft. long. They weigh 250–350 lbs. on average, with some reported at over 600 lbs. Females are considerably smaller, commonly weighing 150–200 lbs.

Opportunists. During the spring and summer, they eat mostly plants and insects, especially ants and bees. They’ll feed heavily on fruits such as apples, cherries, and raspberries, and on nuts and agricultural crops, often, corn. Bears will also eat amphibians, reptiles, fish, and small mammals, mostly rodents, although they can prey on fawns. In the fall, nuts are a critical food, especially acorns and beechnuts, which provide the fat that will get them through the winter. Bears will eat carrion and garbage. They sometimes kill livestock. They do love honey and will eat the bees, too.

Daily activity: Most active at dawn and dusk, but may be active any time, depending on the season and availability of food.

Hibernator? Well… Bears are not true hibernators, but they do sleep deeply during the winter. The females give birth while they’re in this sleepy state. They’ll groom and nurse their young—still half-awake—for about four months (perhaps you can relate). During a warm spell, the females will get up and go outside for a short time.

Migrates? No. They will, however, travel great distances in search of food. Males will move hundreds of miles away from their birth site, while females won’t.

Distribution in NY and the Northeast: Black bears are found throughout North America and are the most numerous of our bear species. New York’s population (after the hunting season) is estimated at 6,000 animals and growing. Traditionally, bears have lived in three areas in New York: The Adirondacks, Catskills, and Allegheny regions, which all have large, unbroken forests and little human activity. Their range is expanding. Bears are now found throughout much of New York, excluding Long Island.

Habitat: Most often found in the deep woods, in areas with large tracts of mature hardwoods or mixed forests that include some wetlands, such as swamps, rivers, streams or lakes. They will live in second-growth forests if better habitat is limited. Black bears like areas with thick ground cover and few people but they will venture into farm fields, orchards, and suburban areas.

Territory and home range: The home range of males is up to 100 sq. miles. Females stay close to where they were born, with a home range as small as 15 sq. miles.

Litter size: 2–3 cubs. Females usually have cubs every other year.

Birthing period: Late January–early February. They give birth in their winter dens.

Amount of time young remain with parents beyond weaning date: They’ll den with their mother their first winter. The family stays together until the spring, when the female’s ready to mate again, usually in June.

Time of year: Any time of year, but problems usually peak in June through September.

Most complaints are associated with their feeding.

From ECL 11-0521: “1. The department may direct any environmental conservation officer, or issue a permit to any person, to take any wildlife at any time whenever it becomes a nuisance, destructive to public or private property or a threat to public health or welfare, provided, however, that where such wildlife is a bear, no such permit shall be issued except upon proof of damage to such property or threat to public health or safety presented to the department. Upon presentation of such proof, the department may issue a permit authorizing the use of trained tracking dogs pursuant to section 11-0928 of this article, and, if the department has determined that no other alternative is feasible, a separate permit to take the bear. Wildlife so taken shall be disposed of as the department may direct.”

From ECL 11-0523: “2. Any bear killing or worrying livestock on land occupied or cultivated, or destroying an apiary thereon, may be taken or killed, at any time, by shooting or device to entrap or entice on such land, by the owner, lessee or occupant thereof, or any member of the owner’s, lessee’s or occupant’s immediate family or by any person employed by such owner, lessee or occupant. The owner or occupant of such lands shall promptly notify the nearest environmental conservation officer and deliver to such officer the carcass of any bear killed pursuant to this subdivision. The environmental conservation officer shall dispose of the carcass as the department may direct.”

Most black bears avoid people unless they learn to associate people with food. This usually happens around dumpsters, garbage cans, campgrounds, or places where people feed bears (often, at restaurants). Bears who have developed this habit pose the greatest threat to people. The conditions need to be changed. To do that, think with your nose. This means:

Don’t create a scent trail to a vulnerable area:

Frighten them away from a site:

First, a caution: if a bear shows any aggressive behaviors–growling, hissing, popping its teeth, or if its ears are laid back and the hair on its back is raised—DO NOT attempt to harrass it and DO NOT approach the bear! It might attack. If the bear’s aggressive, back off. (See the next section for information about what to do if you’re attacked by a black bear.) If the bear is not aggressive:

What to do if you encounter a black bear:

What to do if you’re attacked by a black bear: