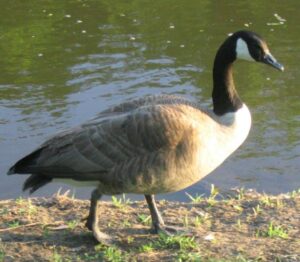 There’s an added twist to solving nuisance problems caused by Canada geese. Some Canada geese migrate, while others remain as residents in New York year round. Resident geese are not lazy birds that just woke up one day and decided to stop migrating, they’re actually a totally different population.

You need to know whether you’re dealing with migratory Canada geese (Branta canadensis, several races) or resident Canada geese (Branta canadensis maxima) before you plan your strategy. For example, summer round-ups will only work if you’re dealing with a resident population because the migratory geese will be in Canada all summer long. They look the same, so the best way to tell them apart is to determine if they migrate or if they breed here. In urban areas, the problem is probably caused by a resident flock, but migratory Canada geese may cause problems in rural areas, and they may temporarily join resident flocks.

From 8–15 pounds. Males tend to be larger than females.

Migrates? Yes, but it’s complicated. Migratory Canada geese migrate in the spring (from the U.S. to their summer breeding grounds in Canada) and the fall (from Canada to their wintering sites in the U.S.). Resident geese usually don’t go far. They may migrate within the state in which they were born, or fly to a neighboring state. But some resident geese, usually young birds and those adults that didn’t breed successfully, migrate to Canada right before the molting period (early June). They remain there during the summer, returning in September. This “molt migration” (first reported in the late 1990s) can dramatically alter the approach to goose management.

Molting: Adult Canada geese molt each summer, usually beginning in mid-June. They congregate in large numbers near ponds and lakes, which provide a safe place to rest and feed, and the open water they need to escape danger. Most adult Canada geese molt in the same place they chosen for raising their young (although sub-adults, and adults that didn’t breed successfully, will often “molt migrate” as mentioned above). The molt lasts for about a month and during that time, geese cannot fly. This is critical! This is when it’s easiest to capture Canada geese. Some techniques, such as barrier fencing, may be highly effective during the molt (see “protect vulnerable crops and sites”).

Habitat: In urban areas, they prefer lawns next to a body of water. Canada geese prefer fertilized lawns. They seek open areas, so they have a good view of potential predators. They like mowed lawns, parks, golf courses, industrial parks with ponds, and playing fields.

Territory and home range: Both parents are aggressively territorial around their nest until the young hatch. Both parents will defend their young until the goslings can fly, usually at about 10 weeks old.

Breeding dates: Canada geese return to their nesting areas in late February or March (as soon as the water opens up.)

Clutch size: 1 brood of 1–10 eggs, average 5. They don’t begin incubating until all of the eggs are laid. Incubation takes 26–28 days. If the nest fails before the young hatch, they may renest.

Hatching: The eggs generally hatch within a period of 8–36 hours. Within one day of hatching, the adults may move their brood up to 2 miles away, seeking a grassy feeding area next to water, for safety.

Fledging dates: at about 10 weeks old.

Amount of time young remain with parents beyond fledging date: They’ll migrate with their parents in the fall.

Time of year: Any time of year. Severe problems are often associated with their molt, when large numbers of geese may gather on lawns that are next to water. Some birds will travel hundreds of miles to a favored molting ground.

Federally protected migratory bird (under the Migratory Bird Treaty Act). In New York, Canada geese are also a game species with a set season. Management responsibility of Canada geese in New York is shared by the DEC, the U.S. Fish and Wildlife Service, and USDA-APHIS Wildlife Services staff.

Federal and state permits are required if you are going to capture, handle, or kill gulls or disturb their eggs or nests (if there are eggs or young in the nest). The permits are issued to the landowner, not to a NWCO. A landowner may chase or disperse geese at any time without a permit, as long as the geese are not physically harmed.

Control techniques marked by this color (blue) require a federal and state permit. Obtain the federal permit first. The US Fish and Wildlife Service automatically sends copies of the permits they issue to the DEC’s Special Licenses Unit, so you don’t have to do this. In most cases, once the DEC has received the federal permit, it can approve the activities through the existing general Canada goose permit.

Control measures that affect wetlands may require other permits. Those techniques are marked by this color (orange). Contact the DEC Bureau of Wetlands for information.

Allow 2 months for processing of the request. There is an application fee. To read the regulations and apply online, see: www.permits.fws.gov/mbpermits/birdbasics.html. Questions about controlling nuisance Canada geese should be directed to your regional DEC wildlife staff or to Rich Chipman, State Director, USDA-APHIS-Wildlife Services, 1930 Route 9, Castleton, NY 12033-9653. Call (518) 477-4837. Email: Richard.B.Chipman@usda.gov

Canada geese have a strong homing instinct. They will usually return to the area in which they fledged, and use the same nesting and feeding grounds year after year. That means that without any control, the local population will almost certainly increase, and the problem is only likely to grow worse over time.

It’s best to address problems when goose populations are low. Some techniques that work for smaller populations fail with larger flocks; and most techniques work better when populations are of low to moderate size. The best time to begin your control activities is in the late winter—soon after the geese have shown up, but before they start nesting. Plan ahead! You’ll need about two months to secure any needed federal and state permits.

Nuisance problems associated with Canada geese usually affect an entire community, not just the residents of one property. The community may be willing to work with DEC and USDA-APHIS-WS staff to craft a solution. NWCOs will sometimes be hired to assist with aspects of the management plan.

Most long-term solutions to goose conflicts involve the use of several techniques in combination, such as hazing, habitat modification, summer roundups, shooting, egg addling, and persuading people to change their habits (most often, you must convince them to stop feeding the geese). Don’t rule out any technique that may be feasible because every little bit may help. Persistence is critical in goose management. Most of these techniques only work well with repeated applications. The use of one technique by itself is less likely to work. Also, it may convince the geese to move to another site where they may cause similar problems.

With a community-wide problem, long-term solutions usually involve lethal techniques to stabilize or reduce the goose numbers, at least initially. (Nonlethal techniques used by themselves may reduce the problem at an individual site, but this approach rarely solves large scale problems.) The most effective way to reduce the size of a flock is to remove adult geese. Canada geese can live for more than 20 years. A female goose may have more than 50 young during her lifetime.

Lethal measures can be controversial. As with any community-wide nuisance wildlife problem, a public information campaign to explain management goals and methods is usually critical to success.

How molt migrations may influence your strategy

One other major point to consider is the possible effect of molt migrations on your goose management strategy. This behavior isn’t consistent; in some areas it’s a big problem, but not in all.

If some birds in the flock you’re trying to manage “molt migrate” in early June, then they may be off-site when certain control techniques, such as harassment and round-ups, have traditionally been most successful. In these situations, it may take more than one year of round-ups to solve the problem. However, at some sites, a molt migration might help solve the problem! How’s that? Perhaps geese only cause problems during the summer. If some of the birds leave, that helps reduce the nuisance.

Here are options for goose management. Remember, start when the populations are low, be persistent, and combine methods for a better chance of long-term success.

Lure them to another site:

If migrant geese are feeding on crops, or resident geese are damaging a certain site, such as a park, you may be able to divert them to a different spot during the time of year when they’d cause trouble at the vulnerable site. Frighten them away from the vulnerable site, then lure them to an alternative area. Obviously, you need a nearby site where the geese will be tolerated, and that site must be attractive. This method won’t work if people are feeding the geese at the vulnerable site. It may even attract more geese. At your sacrificial site, keep the grass well-mowed to make the field particularly attractive to the geese. If there are many geese, they may trample the grass, which might cause them to leave. If that’s a problem, plant some clover, which is more resistant to trampling.

Frighten the birds away:

Block access to open water and the paths between the water and grassy areas (both flight paths and walking paths):

Reduce the amount of good winter habitat for the geese:

Control their reproduction by disturbing their eggs so they don’t hatch: